Information about our sun

What is sunrise and sunset?

Sunrise and sunset are taken to be the times at which the apparent upper limb of the Sun is on the (astronomical) horizon. Due to atmospheric refraction, sunrise occurs shortly before the sun crosses above the horizon. Light from the sun is bent, or refracted, as it enters earth's atmosphere. See Apparent Sunrise Figure. This effect causes the apparent sunrise to be earlier than the actual sunrise. Similarly, apparent sunset occurs slightly later than actual sunset. The sunrise and sunset times reported in our calculator have been corrected for the approximate effects of atmospheric refraction. However, it should be noted that due to changes in air pressure, relative humidity, and other quantities, we cannot predict the exact effects of atmospheric refraction on sunrise and sunset time. Also note that this possible error increases with higher (closer to the poles) latitudes.

How long does a sunrise or sunset take?

The time it takes varies from place to place and from date to date. In most populated regions, a sunset takes between 2 and 5 minutes. In places at very high/low altitudes, sunrise and sunset does not occur, like in the North Pole or South Pole. However, we do provide duration of sunrise and sunset events for major cities worldwide. For example, check out sunrise and sunset duration in Washington, United States.

What is astronomical, nautical and civil dawn?

Astronomical dawn, also known as morning astronomical twilight, is the time of the morning when the sun is 18° below the horizon. (Solar zenith angle is 108°, solar elevation angle is -18°.) It always occurs before the nautical dawn.

Nautical dawn is the time of the morning when the sun is 12° below the horizon. (Solar zenith angle is 102°, solar elevation angle is -12°.) It always occurs before the civil dawn.

Civil dawn is the time of the morning when the sun is 6° below the horizon. (Solar zenith angle is 96°, solar elevation angle is -6°.)

What is astronomical, nautical and civil dusk?

Civil dusk is the time of the evening when the sun is 6° below the horizon. (Solar zenith angle is 96°, solar elevation angle is -6°.) It always occurs before the nautical dusk.

Nautical dusk is the time of the evening when the sun is 12° below the horizon. (Solar zenith angle is 102°, solar elevation angle is -12°.) It always occurs before the astronomical dusk.

Astronomical dusk is the time of the evening when the sun is 18° below the horizon. (Solar zenith angle is 108°, solar elevation angle is -18°.)

What is the zenith distance?

What is the solar noon?

Solar noon is when the sun crosses the meridian and is at its highest elevation in the sky. 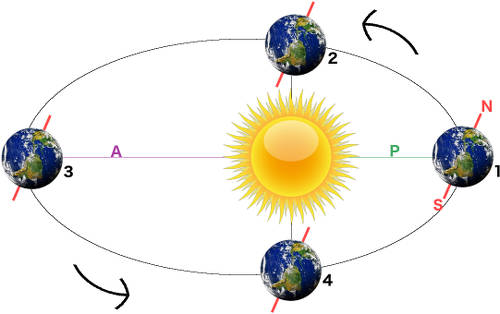 What is an equinox?

An equinox is an astronomical event in which the plane of Earth's equator passes through the center of the Sun, which occurs twice each year, around 20 March and 23 September.

On an equinox, day and night are of approximately equal duration all over the planet. They are not exactly equal, however, due to the angular size of the sun and atmospheric refraction. To avoid this ambiguity, the word equilux is sometimes used to mean a day in which the durations of light and darkness are equal.

What is a solstice?

A solstice is an astronomical event that occurs twice each year (in June and December) as the Sun reaches its highest or lowest excursion relative to the celestial equator on the celestial sphere. The seasons of the year are directly connected to both the solstices and the equinoxes. 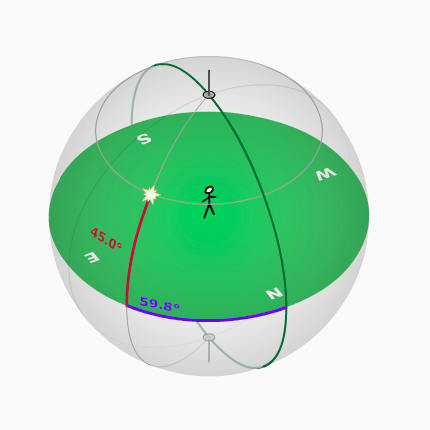 Altitude in red, azimuth in purple.

What is altitude and azimuth?

Azimuth and elevation are the two coordinates used in the Horizontal Coordinate System meant to define the position of a celestial body (sun, moon) in the sky as viewed from a particular location on the surface of Earth at a particular time.

Altitude (Alt.), sometimes referred to as elevation, is the angle between the object and the observer's local horizon. For visible objects it is an angle between 0 degrees to 90 degrees.

The azimuth is the angle between a celestial body (sun, moon, etc) and the North, measured clockwise around the observer's horizon.

What is mean solar time?

Mean solar time is the system of days and hours mathematically computed in order to give the average value to every hour and day.

Mean solar time is what we commonly refer to as civil time, or legal time, and it consists of 24 hours (an average solar day equals 86,400 seconds) as measured by a local clock.

What is aparent solar time?

Apparent solar time is the system of days and hours which goes strictly by the sun itself and is thus continually changing in value from day to day. It is the time between two successive transits of the sun over the same meridian.

What is the equation of time?

The difference between apparent solar timeand mean solar time is known as equation of time.

During a year the equation of time varies, as shown in our solar yearly calendar. Its change from one year to the next is slight.

What is solar declination?

Solar declination is defined as the angle between the Sun’s rays and the equatorial plane. The solar declination on any particular day of the year can be calculated, and that information together with your latitude can be used to calculate the solar elevation angle (the angle of the Sun above the horizon) at a given time on a given day in a given location.

The solar calculations shown in this website are based on equations from Astronomical Algorithms, by Jean Meeus. The sunrise, sunset, dawn and dusk results are theoretically accurate to within a minute for locations between +/- 72° latitude, and within 10 minutes outside of those latitudes. However, due to variations in atmospheric composition, temperature, pressure and conditions, observed values may vary from calculations. Please keep that in mind.